Which Was The First Coney Island? 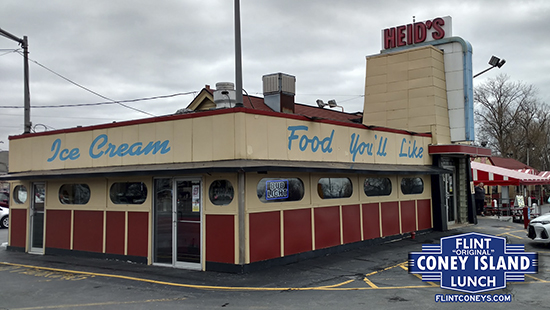 Heid’s of Liverpool, in Liverpool, NY, on April 20, 2018. While certainly not a “Coney Island restaurant” per se, it’s one of the earliest continually-operating hot dog shops in the U.S., and may be where Simion Brayan stopped near Rochester on his way to Flint.

Discussions such as this one describe what defines either a “hot dog” or a “coney”, i.e., that it’s the sausage itself, not defined by any added buns, sauces, or other toppings. That page also shows that the Flint Coney Island initially described itself in 1920 as “Coney Island brought to Flint”, while offering New York-style Red Hots.

Considering these definitions, and in researching older newspapers, it’s now apparent the first Coney Islands weren’t where they might have been expected. The first decade of the twentieth century saw numerous Coney Island stands and shops opening across the country, “bringing Coney Island” to those communities. An example of this occuring in Michigan were a pair of Coney Island Red Hot stands operated by one individual, a John L. Hay, at waterside parks in Saginaw and Bay City.

Wenona Beach Park in Bay City, Michigan, which had first opened in 1900 and was expanded in 1903, opened for the 1907 season on June 2nd. An ad in the Bay City Times on May 31st described a casino, a one-act play and other entertainment, rides, restaurant, ice cream, and “Coney Island Red Hots.” How those were to be provided wasn’t quite clear in the ad.
For the ad for Wenona Beach Park the following year on July 4, 1908, the Red Hot Stand was described as “The Original John Hay Coney Island”, with a W.W. Hodgkins being named as “Prop.” (Proprietor) This is apparently the first naming of a stand or restaurant outside the state of New York as a “Coney Island.”
By 1911, Hay’s Original Cony [sic] Island Red Hots had apparently become so popular, he opened a second location at Riverside Park slightly south of Bay City in Saginaw, Michigan. The ad for that opening also included a photo of Mr. Hay, with the caption “You All Know Him.”
By 1916, Hay’s “sugar bun” supplier Westphal’s Home Bakery advertised their cakes, breads, cookies, and other items in the Saginaw News, piggybacking their ad on his stand’s increasing popularity.
Ads for John Hay’s stands at Riverside Park in Saginaw and Wenona Beach Park in Bay City ceased after 1919 and 1920 respectively, indicating Mr. Hay had likely closed those stands.
A timeline of openings of the first two decades of the earliest coney island restaurants in widespread areas of the US is rather telling. The first two, Mr. Hay’s stands, are included merely as examples of earlier Coney Islands, not as definitive “firsts.” It’s possible, albeit likely, that any claim of a “first” stand outside of New York City may never be proven. Except for Lafayette and American Coney Islands in Detroit, Todoroff’s and Virginia Coney Island in Jackson, Michigan, and Coney Island Lunch and Coney Island Texas Lunch, both in Scranton, Pennsylvania, each of the owners would likely not have known what the others were doing, as communication between immigrants in those days was sparse. It’s also clear that the owners immigrated from various parts of Greece and Macedonia at various times. That the Coney Island phenomenon occured at all is an interesting matter.