Two Hofmann Snappy Grillers served as “coneys” at Heid’s of Liverpool in New York. The coney is the type of sausage … There’s no sauce, and they’re served on a New England roll, known in New England as a frankfurter or frankfort roll. The spicy mustard is a Heid’s original, and is available in bottles. 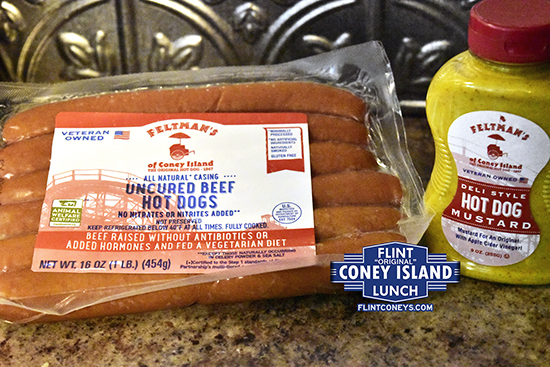 The current version of Feltman’s Red Hot, available at Whole Foods., along with a bottle of their mustard.

Online discussions can become rather heated when discussing what defines a “coney.” The most prominent misconception is that it’s made up of a hot dog in a bun with a sauce. But history, including the history of the Flint Coney, shows that the coney dogs themselves are the defining factor, without the sauce. While the Koegel Coney Frank might be thought of as a “frank made for coneys”, it and similar products around the country have historically been packaged and offered on restaurant menus using only the word “coney.” The “coney” is the dog itself, without the sauce, regardless of claims to the contrary.

The one development that would be important to the Coney Island hot dog is that a gentleman named Thomas Feltman immigrated from Germany in 1856 at the age of 15. By 1867 he was selling meat pies from a wagon on Coney Island when he came up with what he called the “Red Hot”. He then opened Feltman’s German Gardens, also on Coney Island, in about 1870. Feltman subsequently turned this into a very lucrative resort, with rides and restaurants, and by 1920 was serving an estimated five million customers each year.

It turns out coneys in Flint weren’t always what Coney Island restaurant patrons are used to getting today. In fact, for a few years at the very beginning of the phenomenon, the only coneys available in Flint were New York style.
George N. Brown had immigrated to Flint from Boufi, Macedonia, alone in 1908 at the age of 12, by way of Canada, Ohio, and Detroit. (“Original Flint Coney Island Owner Dies”, Flint Journal, July 24, 1967) Steve G. George had also been born in Boufi on December 15, 1892, and immigrated to Flint in 1919. (Flint Journal obituary, October 11, 1965) The two had founded Flint Coney Island shortly after Steve George arrived in Flint, with the latter also owning the Ritz Drive In. While George Brown’s obituary disproves previous reports of him being from Montana, what’s even more interesting is that his immigration path parallels Simion Brayan’s own path of Toronto, Canada, and Youngstown, Ohio, giving credence to the possibility the two men were related.
An advertisement for the recently-opened Flint Coney Island in the Flint Journal on July 30, 1920, along with other references stating the restaurant opened in 1919, seems to bring confusion to the timeline of the Flint Coney itself in view of Simion Brayan’s 1921 immigration record at Buffalo, New York, from Toronto, Ontario, Canada. In reality though, this advertisement clears up a number of questions about not only the timeline, but also answers questions about the restauranteurs’ concept of the ‘Coney Island’ restaurant phenomenon itself in Flint, and what likely finally drove Brayan to the development of the Flint Coney.
First is the phrase that’s most prominent in the advertisement, ‘Coney Island … Brought to Flint’. This verifies that, in fact, Flint Coney Island was originally a direct attempt to bring the flavors of Coney Island, New York, to the city. This can also be seen in the offering of Charles Feltman’s Red Hots with a ‘snappy chilli [sic] sauce’, which is exactly what Feltman’s and Nathan’s were serving at the time. But even more telling for the timeline is the lack of a mention of Koegel products within the advertisement. Brayan wouldn’t arrive in Flint until after 1921, so the Flint Coney as we know it was yet to be offered at Flint Coney Island. This is then the restaurant as George N. Brown and Steve George operated it, prior to Brayan’s development of the Flint Coney we know today.
What becomes apparent here is that, when Brayan arrived in Flint, Flint Coney Island would have been serving a dish very similar to what he had tried and disliked near Rochester, New York. That may have been the very impetus he needed to develop the Flint Coney as we know it today.

While the coney at Heid’s is served without sauce, their chili is available to top it with.

It’s been reported that Flint Coney founder Simion Brayan visited a lunch counter in Rochester, New York. This was likely while he was in Buffalo after his second immigration in 1921. He reportedly ordered what they called a “coney island”, then was quoted as saying it was “practically tasteless … unfit for a young man whose palate was accustomed to the hardy cuisine of southeast Europe … They used ground beef, a little chili powder, a little paprika, but it had no taste.” Thinking back to the Macedonian goulash he’d eaten back in Boufi, which contained beef heart and occasionally beef kidney, all in a beef suet base, he determined he could make a better coney sauce based on the heartiness of that Macedonian dish.

The region of Rochester, New York, was well-known for Feltman’s Red Hot, which is a frankfurter. This area is even more well-known for a more local Wiesswurst-like sausage offering known as a “White Hot.” The White Hot was originally made from lesser-quality and less expensive meats and fillers than the Red Hot, although they’re now made with higher-quality ingredients. Restaurants in the Rochester area serve both the Red Hot and the White Hot.

A package of Hofmann’s Snappy Grillers, aka a “White Hot”, served as coneys on restaurant menus in upstate New York, sans sauce, and available locally in Wegman’s grocery stores. This is the same product as in the first image on this page of coneys at Heid’s.

What’s most important to note about the White Hot is that, on some menus in Rochester and the Syracuse areas, it is sometimes referred to as a “coney”. But on others, it is not. For example, Heid’s of Liverpool outside Syracuse, opened in 1886 and at its current location since 1917, lists the White Hot as a “coney” on their menu. Also, the Hofmann Sausage Company in Syracuse has produced their “coney” White Hot since 1932, recently renaming the product on the label as the “Snappy Griller”. The sausage is not referred to as a “coney island”, but the implied genealogy of the name from Coney Island in New York City is there because of Feltman’s Red Hot being listed on those same restaurant menus in the area.

In 2015 a pair of Brooklyn natives, brothers Joe and Michael Quinn, revived the circa-1867 Feltman’s of Coney Island brand, in honor of their brother Jimmy, who was killed on 9/11. Five years after the reboot, the hot dogs and mustard were available in more than 2,000 Whole Foods Markets and Publix groceries nationwide.

So then, what defines a “coney island” or a “coney dog”, and what differentiates that from a “chili dog”? Is a Detroit Coney a “chili dog” because its sauce has a more wet consistency than the sauce for a “Flint Coney”? Not at all. The term “coney island” when referring to the end product is where culture comes into play. A “coney island restaurant” has traditionally been either owned or was founded by those of Macedonian, Greek or, more recently, Albanian decent. The “coney” those restaurants were initially created to serve has been a frankfurter or Vienna-style sausage with a lamb or sheep casing. The sauce, at least in the three main styles in Michigan (Jackson, Detroit, and Flint) has at some point been created using beef heart, although that’s no longer true for some older styles outside of Flint. In other parts of the country, coney island sauces are made with ground beef, but they’re also still rather savory like the styles in Michigan.