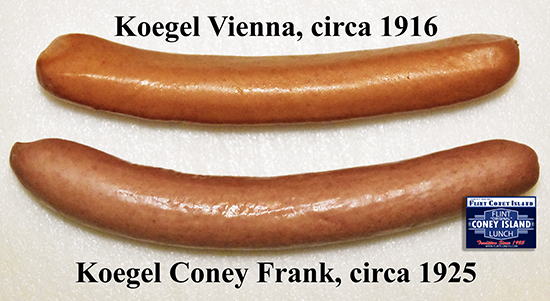 One of the most common misconceptions is described by Managing Culinary Director J. Kenji López-Alt over on the Serious Eats web site on January 6, 2012, in their “Taste Test: Natural Casing Hot Dogs From Michigan“:

Michigan has some of the highest hot dog standards in the country, disallowing the use of mechanically separated beef, an excess of fat and offal, and limiting the amount of water a hot dog can contain to just 10%. I can’t tell you for sure whether these standards actually make for better dogs since comparing a Michigan dog to a non-Michigan dog is apples to oranges, but I can tell you that the dogs sure are tasty. The best come in natural hog casings to offer snap and spring with each bite.

This used to be true but it’s been quite a long time since this information was current. A law went into effect in Michigan in 1952 which, according to 1972 Michigan Department of Agriculture Director B. Dale Ball, “permits only the use of inspected skeletal meat in these products. It requires a minimum of 12 percent protein … Federal law permits the use of such animal by-products as hearts, lungs, tongues, tripe, eyes, udders, lips, ears, snouts, esophagi, glands, bladders and paunches … The federal law has no minimum protein requirement.”

A report in the Ludington Daily News on October 26, 1972, stated the Michigan law had already been struck down by the 6th U.S. Circuit Court of Appeals in Cincinatti, Ohio, in response to a lawsuit by meatpacking companies Armour, Hormel and Wilson. Ball and others from the state were planning an appeal to the U.S. Supreme Court, which refused to hear the case. This was due to Solicitor General Erwin Griswold advising the Court that “Congress has explicitly excluded the states from imposing additional requirements upon meat that has been federally inspected under the federal meat inspection.”
The Argus Press subsequently reported that the Michigan delegates testified before subcommittees on June 14, 1973, in an effort to amend the Wholesome Meat Act of 1967 “and allow states to ban the byproducts and adopt any standards they choose, as long as they are at least as strict as the federal ones.” Ball contended “meat byproducts allowed under federal standards are more susceptible to contamination and can contain harmful microorganisms generally not found in skeletal beef and pork.”
On June 26, 1973, the Argus Press reported that some Michigan-based meat packers were going to label their hot dogs as “Michigan Grade I”, to show that those products were still within the spirit of the former Michigan higher standards.
However, the same article reported that the USDA was amending the federal hot dog labeling laws effective that June 1st. The article went on as follows:
The article finished by stating that if consumers purchase Michigan products it’s the consumers that will have won. Else, it’s the larger meatpackers who have won.
Michigan’s Food Law, effective October 1, 2012, only contains the following information regarding hot dogs:
289.7119 Other comminuted meat food products; compliance with federal regulations. Sec. 7119. Other comminuted meat food products, including nonspecific loaves and liver products, headcheese, blood sausage, kishka, tongue sausage, chili con carne with beans, or any other meat food products that may be allowed, shall be produced in compliance with applicable regulations of the Un ited States department of agriculture food safety inspection service.
=====
289.7131 Federally inspected meats; preemption of state ingredient standards. Sec. 7131. A person shall not sell or offer for sale a product that is not manufactured to the ingredient standards of this act unless the federal government legally preempts Michigan’s ingredient standards. In that case, federally inspected meats not meeting the ingredient requirements of this act shall be identified as federally inspected on intact, sealed packaging from the federally inspected location.
=====
289.7133 Artificial casings or containers; products considered as adulterated. Sec. 7133. (1) All products manufactured under terms of this chapter may be sold in colored artificial casings orcontainers only if the products are in complete compliance with all applicable regulations of the United States department of agriculture. These products shall not be sold in colored natural casings. (2) In addition to the requirements of section 1105(1)(a), any product manufactured under the terms of this chapter is adulterated if it is the product of an animal which has died otherwise than by slaughter.
It becomes apparent that Michigan’s meat packers can simply follow the federal law, with few other regulations. But it’s doubtful the good ones go that route, and instead follow the spirit of Michigan’s former higher standards. The latter is decidedly the road to higher quality.