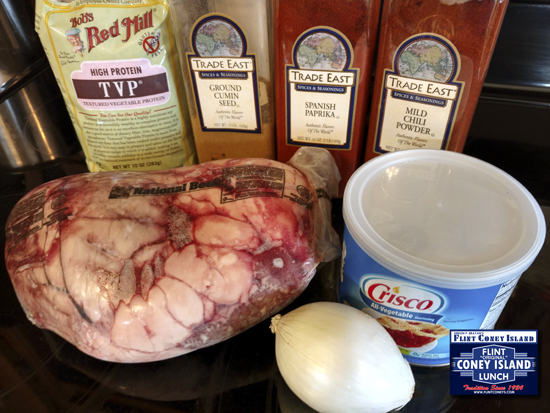 Forget what you think you know about Flint Coney sauce. There are no ground hot dogs in it. There’s certainly no tomato sauce or processed yellow mustard in it either. There might be kidney or other meats some restaurants may add to their own sauce, which is part of what makes each restaurant’s sauce unique.

There’s no one single recipe for Flint Coney sauce, as each restaurant prepares the ground beef heart from Abbott’s their own way. This is my own version of the sauce, in a single recipe, for the stalwarts who want to try to do it all themselves.

As the sauce for a Flint Coney is traditionally a fine grind, we’ll accomplished the finer grind by freezing and grinding the beef heart twice. See the notes below the recipe for more details.

Dave Gillie of Gillie’s Coney Island in Mt. Morris has described the ingredient list from the 25 lb bag of Flint Coney base from Abbott’s Meat as “beef heart, beef, and soy texture”. Other sources describe the cooking process as sautéing chopped onion in rendered beef suet aka beef tallow, adding Abbott’s meat mixture, then adding the spices in a certain way to get a given restaurant’s flavor for the sauce. While Dave Gillie told us he uses vegetable shortening, he also mentioned his cooking experience at Starlite where cooks mentioned using the beef suet in earlier times.
Textured vegetable protein (which is, by definition, a “soy texture” and shows up in the ingredient list on Abbott’s 4lb and 10lb bags of finished “topping”) wasn’t developed until 1965 … Abbott’s may have included some sort of cracker meal in the ground beef heart prior to that. But textured vegetable protein is an inexpensive and quick solution for the same result. Beef suet also takes a long time to render over low heat, and can burn easily if the heat is too high or if the suet contains too much debris. We’ll take Dave Gillie’s suggestion and use vegetable shortening instead.
With the beef heart frozen and ground twice to a fine grind and the textured vegetable protein added, we’ll also follow the other sources by sautéing minced white onion in the shortening, then adding the meat mixture and simmering before spicing the sauce to match the known flavor.
In various sources, the spices for Flint Coney sauce simply specify “paprika”. Most people don’t realize there are numerous kinds of paprika available. If a cook happens to have the Hungarian style in their pantry and use it, the sauce will end up far too sweet. We specify the more savory Spanish paprika. Smoked Spanish paprika would also be an excellent choice, and may also be preferable to some. 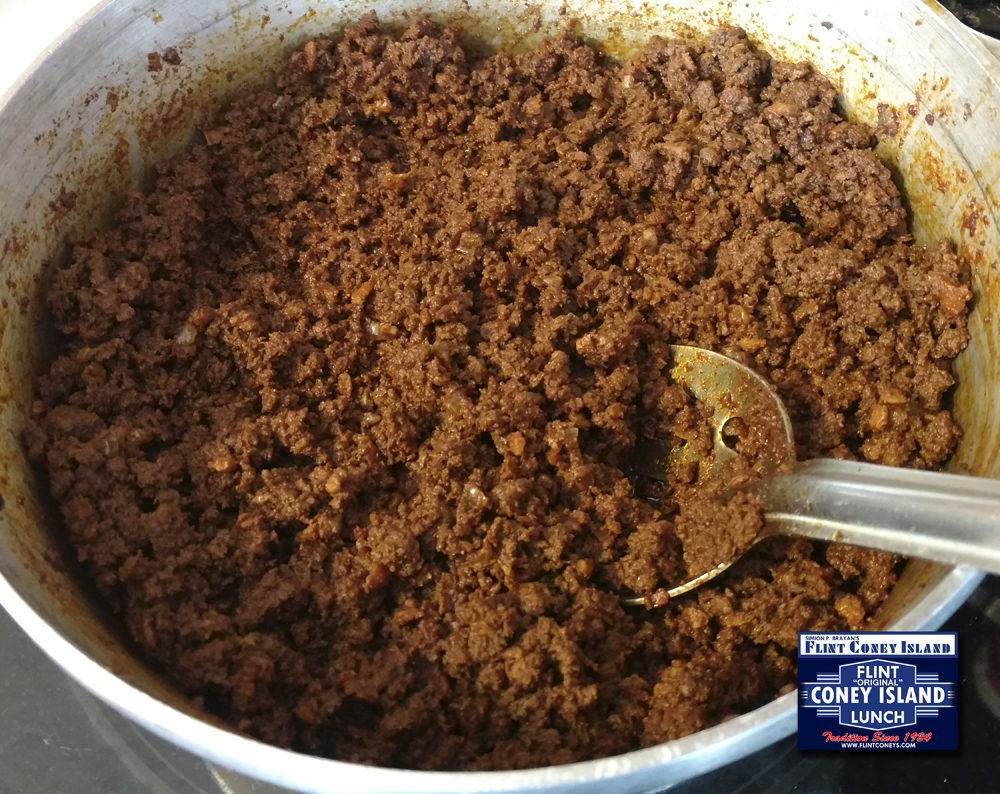 There’s no one single recipe for Flint Coney sauce, as each restaurant prepares the ground beef heart from Abbott’s their own way. This is our own version of the sauce, in a single recipe, for the stalwarts who want to try to do it all themselves.
Print Recipe Pin Recipe
Prep Time 1 hr
Freezing Time 2 hrs 30 mins
Total Time 3 hrs 30 mins