Most online recipes and recipes in-print are about as far from Abbott’s original sauce as they can possibly get. They involve ground hot dogs, or maybe haven’t been tested and should never be made.

Still, in scouring the web for variations and specific versions of recipes for Flint-style coney sauce, I’ve stumbled across what appears to be a “diamond in the rough”. This one is seriously as close to the original as I’ve seen so far.

Over on her Lost Recipes Found site, greater-Chicago-area food writer Monica Kass Rogers has posted what she wrote up as the recipe for “Gillie’s Coney Island Chili Dogs“. Her notes on the recipe included the following statement:

“Gillie’s Coney Island [circa 1985 in Mt. Morris, Michigan] … shared this large-volume recipe for Flint-style Coney Island chili in a Michigan Restaurant Association cookbook more than 20 years ago.”
It turns out that the Michigan Restaurant Association published a spiral-bound cookbook titled “A Taste of Michigan“ in 1991. There are a couple things uniquely interesting about this particular recipe that illustrate its authenticity. For example, there is the process for this recipe as described by Ms. Rogers, i.e.: This is extremely interesting because it matches the description regarding the making of the Abbott’s sauce given by none other than Edward Abbott himself to an interviewer from the Flint Journal:
“According to Edward Abbott, who eighty plus years later is still making the ground meat base for Flint’s coney island sauce, the only meat ingredient is beef heart, regardless of the stories and rumors of other meat parts being used. Abbott’s added some seasoning … The sauce is made by boiling commercially prepared beef suet for several hours, then browning finely chopped onions in it and adding the spices and the meat. Taste varied according to the size of the chef’s hand … ‘They still sell the traditional sauce; the meat base … The Abbott product has always been sold uncooked …’” [“Two to Go: A Short History of Flint’s Coney Island Restaurants”, 2007 by Florine, Davison & Jaeger (Genesee County Historical Society)]

Here is Dave Gillie’s recipe as it appeared in “A Taste of Michigan”: 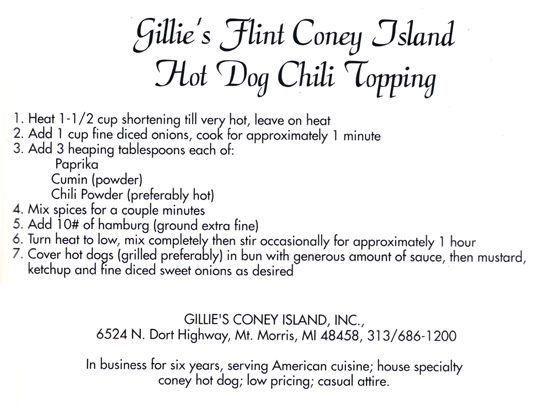 In an email on January 25, 2015, Dave Gillie verified that this is a minor variation what he makes at Gillie’s Coney Island. “The book recipe was slightly modified for publication [from what we make] just to accommodate being done at home. I made one change in that published recipe: I changed the normal extra fine raw ground ‘beef, beef heart, soy texture’ that I buy from Abbott’s Meat in 25# bags with suggesting they use lean hamburg and grind it extra fine. (I might have suggested trying to find beef heart?)” While he may have suggested this modification, it did not show up in the final publication.

To be honest, this is a lot of Gillie’s coney sauce. If you eat coneys as much as we do this might be a worthwhile venture. But the amount this makes simply isn’t at all “family friendly”. We’ll adjust these amounts to something that makes more sense for a home kitchen.

Ground beef is specified in ratios of lean meat to fat. In most foods, especially burgers, we’ll use an 80/20 ground chuck. But for this sauce we’ll use more of a utility beef, a 73/27. Since it’s readily available in 3 lb. chubbs, that’s the amount we’ll adjust the recipe for and divide the other measurements by about a third.

Also, the spices simply specify “paprika”. Most people don’t realize there are numerous kinds of paprika available. If a cook happens to have the Hungarian style in their pantry and use it, the sauce will end up far too sweet. We’ll make sure to specify the more savory Spanish paprika. 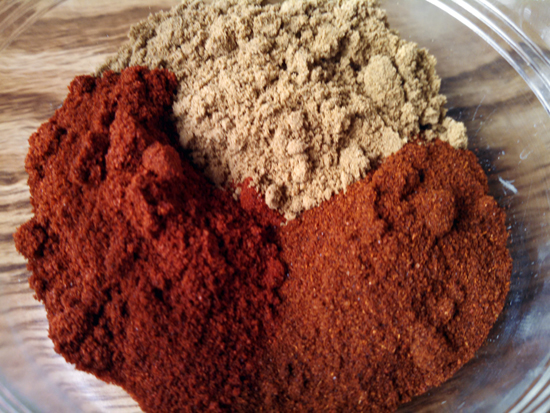 But there’s also one other adjustment we want to make. This recipe calls for 1 1/2 cup shortening. When this recipe was apparently printed, shortening had different characteristics than it does now, back in the pre-trans fat ban era of the 1980s. Still, shortening is vegetable oil, not an animal fat, and we can certainly do better in the interest of flavor.

We can replace the shortening with lard to get better richness. But remember, lard is made from pig fat. Mr. Abbott specifically mention boiling beef suet for several hours, the result of which is beef tallow. This would certainly give the sauce a more accurate flavor profile. Beef tallow is readily available in jars from FatWorks. What we can do is specify both the lard and the tallow as options, forgoing the shortening completely.

The end result of these adjustments, along with modifying the list of ingredients to match currently-available products (and obviously ditching the ketchup), is below: 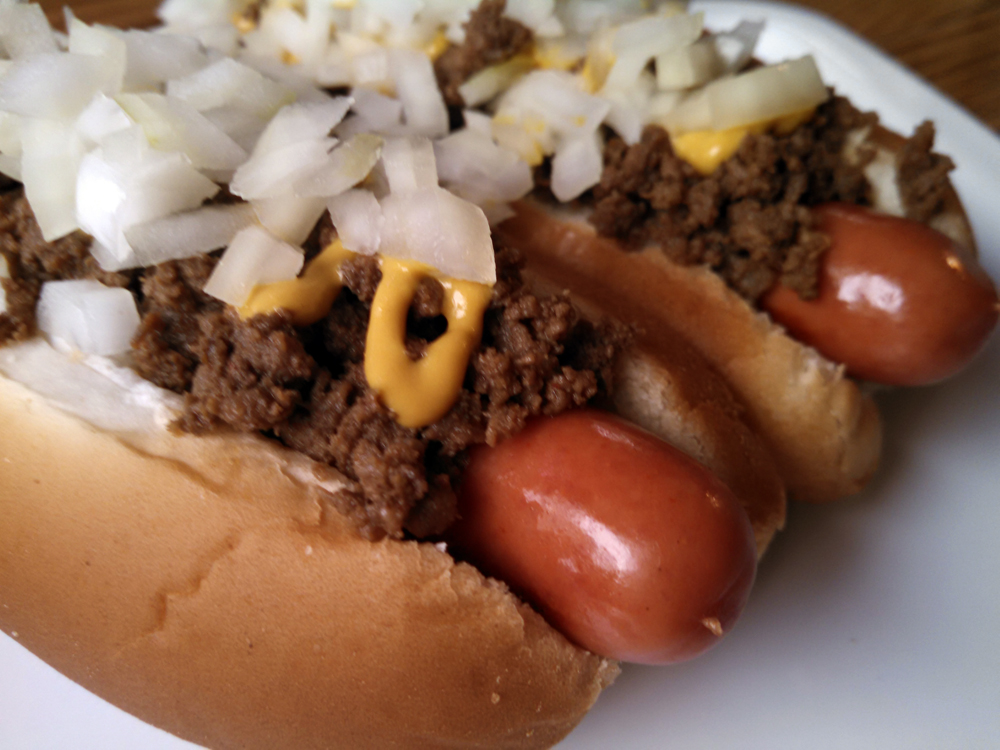