A Coney Island Hot Dog is Not A Sandwich 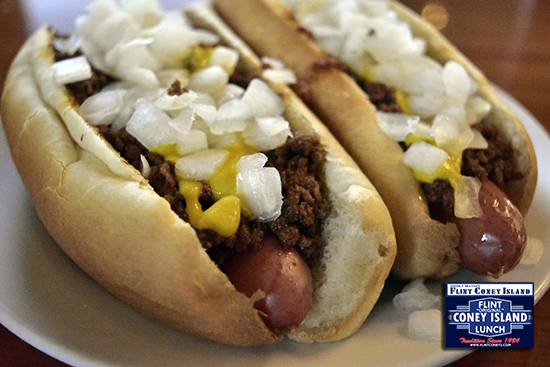 The Flint Coneys from the cover of “The Flint Coney: A Savory History”, which I photographed on July 26, 2021, at Gillie’s Coney Island in Mt. Morris, Michigan.

There are many who claim that a hot dog in any form is a sandwich and that, by extension, a Coney Dog is a sandwich as well. It’s not. Consider this: When someone goes to the store for a “pack of hot dogs,” the buns aren’t included in the package of frankfurters or similar sausages of German origin. People might shop for a particular type or brand of hot dog, but the buns are more likely in another part of the store altogether. Hot dogs are never manufactured and cured or smoked in the same facility the bun is baked in. The claim that the hot dog is only named so because of the added bun is therefore false, even though they’re most often served one within the other in North America.

The claim that a hot dog is a sandwich also runs against definitions in the Oxford English Dictionary.

A sandwich is defined by the Oxford English Dictionary as “(a)n item of food consisting of two pieces of bread with a filling between them, eaten as a light meal.” [ref] This is different from the Oxford definition of a hot dog as “(a) frankfurter, especially one served hot in a long, soft roll and topped with various condiments.” [ref] Even more telling is the Oxford definition for a frankfurter, which states “a small, cooked and smoked sausage of beef or beef and pork.” [ref] These latter definitions clearly describe a hot dog as “(a) frankfurter”, i.e. as the meat itself, without any type of bread product. Therefore, a hot dog on its own is not a sandwich in any form.

A Coney Island Hot Dog is then a hot dog, in a long, soft roll, with toppings. Oxford itself defines a Coney Dog as “(a) type of hot dog topped with chili con carne (without beans), raw onion, and mustard.” [ref] It’s the “long, soft roll” that makes the difference. Oxford also makes this differentiation in their definition of a Submarine Sandwich, i.e., “(a) sandwich made of a long roll filled with meat, cheese, and vegetables such as lettuce, tomato, and onions.” [ref] Here the item is called a sandwich in the definition, which does not occur in their definitions of either a hot dog nor a Coney dog.

Clearly, as there are not two slices of bread involved in the Oxford definition, Oxford states that a Coney Dog is not a sandwich, as opposed to other definitions within their work which explicitly state that a defined item is a sandwich.