One of the more unique pizzas I’ve seen in recent years is in the areas of Toledo, Ohio, and Monroe County, Michigan, just north of the state line from Toledo. According to the web site for Vito’s of Bedford, Michigan, the Tony Packo’s pizza consists of “Tony Packo’s Hot Dog Sauce, sliced Tony Packo’s Hungarian Sausage, red onions, cheddar & mozzarella cheeses, topped with mustard. Served with your choice of Tony Packo’s Original or Sweet Hot Pickles & Peppers.”

After enjoying one of these pizzas myself over the years, I got to thinking … Why not do the same with the Flint Coney? Frank-ly, I’m glad I did. It turned out to be even better than Vito’s Packo’s version, and is something I’ll definitely make again.

As far as ingredient measurements go, this is something you really just need to eyeball. That’s why the ingredient list below only lists what’s needed, not how much. Have fun with it. That’s what we did. 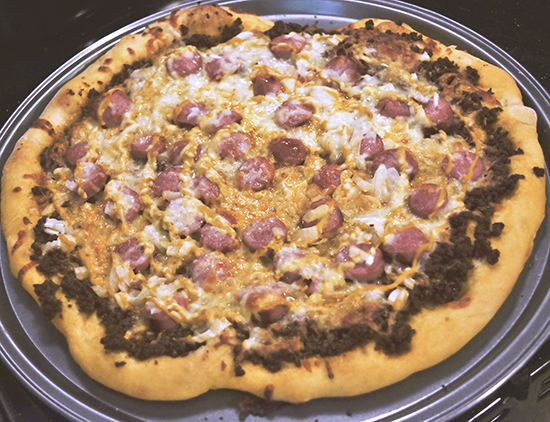